Celebrating advances of biotechnology for food and nutrition security in Kenya

The Scinnovent Centre, African Biotechnology Stakeholders Forum (ABSF), and The National Commission for Science, Technology and Innovation (NACOSTI) jointly organized an event to commemorate this year’s African Scientific Revival Day. Held on 30th June 2014 at the National Agricultural Research Laboratories (NARL), housed at Kenya Agricultural Research Institute (KARI), the theme for this year’s event was ‘celebrating advances of biotechnology for food and nutrition security in Kenya’.

The Africa Scientific Revival day was dedicated during the 46th Ministerial Conference of the Organization of African Unity (OAU). The objective of the celebration was among others, to understand biotechnology in its entirety and how it has helped in fighting food and nutrition insecurity in Kenya. The forum provided an opportunity to demonstrate the achievements Kenya has recorded in the field of biotechnology research and application and attracted participation from researchers, private sector actors, government agencies, universities/research institutes, farmers, the youth, non-governmental organizations (NGOs) and high schools involved in biotechnology in the country.

The event was opened by Dr. Maurice Bolo, the Director The Scinnovent Centre who gave a key note address and was followed by a plenary session to discuss whether biotechnology has worked for Kenya.
[slideshare id=36581107&doc=keynotepresentationscientificrevivalday2014mauricebolocompatibilitymode-140703015338-phpapp02]
The event further saw the launch of a monitoring and evaluation framework on biosafety which was presented by Kennedy Oyugi, Programmes Officer- ABSF. The youth were strongly represented during this event, with Asha Bakari presenting the youth involvement strategy in biotechnology communication through the Kenya Youth Biotechnology Network. Subsequently, an overview of Kenya Biotechnology Information Centre (KEBIC) website was presented by Samuel Njenga.

While making her introductory statement, farmers’ representative Mrs. Beatrice Mwaura gave her story of how successful she had been in agriculture through tissue culture banana farming. She said the tissue culture banana matures after only 9 months as opposed to conventional banana which takes between one and one and a half years to mature. They harvest all year round regardless of the weather conditions since they only need to use manure from cattle, pigs and chicken which is readily available. She said that before the onset of tissue culture banana, she was not able to pay for her children’s school fees which she currently pays much more comfortably from the proceeds of banana farming.

In an exclusive interview with Victor from The Scinnovent Centre, Mrs. Beatrice Mwaura, a farmer and a grader at Sabasaba Agribusiness Co-operative Society in Murang’a County said that their society was started in 2004 currently boasts of 120 members. She said the society offered easy market access for the farmers involved in tissue culture banana and had employed a manager who was charged with marketing the member’s products. The farmers produce included banana and its products such as flour, crisps, and banana paste used as jam which they sell through the society.

Mrs. Mwaura said that the knowledge was got from Africa Harvest that carried out an awareness campaign on the increasing demand for banana and its products, sold to them the first cultivars and trained them on how to develop the plants. A single farmer can sell up to 500 kilograms per month at a cost of Kshs. 16 per kilo. The main challenge they face is inadequate fertilizers and sometimes water. This could be solved by rearing cattle and using the dung as organic fertilizer. She urges other farmers to embrace tissue culture banana as it gives a better alternative to maize and other crop farming.

From these success stories, it is very imperative for all the stakeholders to continue supporting the local farmers by lowering the costs of getting cultivars and training the farmers on the best ways to optimize their produce and income. The scientists should therefore come up with techniques of using tissue culture in other plants and crops to diversify the agricultural sector.  I urge all the stakeholders in biotechnology to always mark this day since it gives a platform for sharing experiences which could be oblivious to other players in the agricultural biotechnology sector. 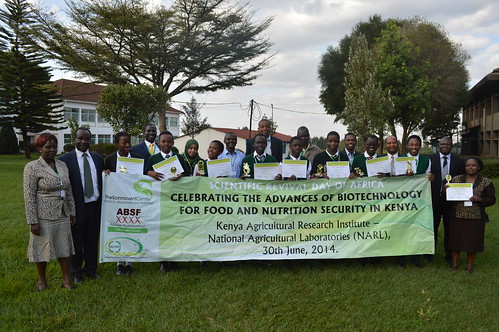 The culmination of the event was through a session that involved presentation of awards to the top students from Hospital Hill High School who had participated in a science competition, organized by The Scinnovent Centre on the theme ‘Science and Technology as the answer to hunger and malnutrition in Kenya’.

This post was contributed by Calvince Onyango of the Scinnovent Centre

PrevPreviousOpen Forum on Agricultural Biotechnology (OFAB), May 2014 Session “Ban on the Importation of Genetically Modified Organisms in Kenya”
NextE-Consultation: The Role Of Biotechnology For Food And Nutrition Security In AfricaNext