Universities as Key Centres for Biotechnology Research, Development and Innovation in Africa

A panel discussion focusing on biotechnology in Kenya was held during the commemoration of this year’s African Scientific Revival day. ‘Has Biotechnology worked for Kenya?’ – this was the title of the session whose panel consisted of Dr. Francis Nang’ayo, manager regulatory affairs at African Agricultural Technology foundation (AATF-Africa); Dr. Susan Musembi, an animal biotechnologist from Kenyatta University who is also director of STEM Africa and the scientific advisor at the Chandaria Information Centre at Kenyatta University; Dr. Roy Mugira a molecular biologist and government advisor on biotechlogy policy- Ministry of Education, Science and Technology; Mr. Kevin Oyale from African Biotechnology Stakeholders Forum (ABSF) who is the coordinator of Kenya Youth Biotechnology Network(KYBNet); Mrs. Purity Nyaga, the head of sciences in Hospital Hill High School and head of biology; and Mrs. Beatrice Mwaura, a member of the Saba Saba agribusiness cooperative society and a banana breeder from Muranga county.

Noting that Kenya operates in a global space, Dr. Nanga’yo expresses that it was paramount that the global environment be considered in such discussions, and added that he would ask the question differently; ‘Has Biotechnology worked for the whole world?’ 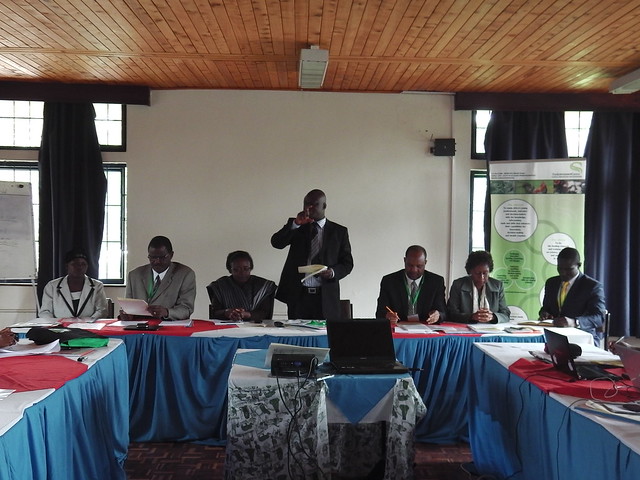 In her response, Dr. Musembi took the growth of the knowledge economy approach to answer this question where she explained that this is what drives the development of a nation. Universities form the key place where that knowledge can be generated. Apart from national and international institutions, almost all universities in Kenya are currently running programmes that revolve around biotechnology. Dr. Musembi informed the audience that research competences have grown with three universities in Kenya as well as public research institutes currently having basic functional equipment and as a spin off from biotechnology. “we have seen entrepreneurship and creation of biotech companies” she asserted, highlighting the following:

During the panel discussion, it emerged that to facilitate and encourage innovation and entrepreneurial activities at the university, Kenyatta University has spearheaded the Chandaria Business and Incubation Centre where they encourage staff and students to come up with ideas that can be commercialized. The centre helps these students understand intellectual property (IP), and if their ideas are patentable or not. Currently, they have nothing in biotechnology , a situation that begs many questions: can innovation be taught? could it be that our education system does not allow our students to be innovative or are we engaging students the wrong way? Unlike in other fields, Dr. Musembi acknowledged that they recognize that in biotechnology, incubatees need rich environments where they can interact with the lecturers and the professors as well as industry to grow the ideas to competitive levels.

To summarize on innovation in biotechnology by universities, Dr. Musembi showed that universities around the world have been doing great rolling out patents and business inventions in hundreds. University of Massachusetts for example, is the bedrock of most biotech companies. As much as biotechnology is a high-risk investment area, we can as well grow our universities and encourage innovation and entrepreneurship.

Stating that the youth may not be willing to go to the farms but are involved from the enterprising point of the industry, Mr. Oyale seemed to concur with Dr. Musembi and emphasized that the youth are also part of knowledge production, doing research in the universities.

The discussion extended into policies in the country and how these affect biotechnology development, specifically the ban on GMO. Dr. Nang’ayo advised that it is essential to involve the government in such meetings because it is the policy holder. He emphasized that for subsequent meetings, an entry point to the government at the higher levels either at institution or cabinet secretary to principal secretary of science and biotechnology should be established. this he said will make more impact if the highest level of decision making is engaged in these discussions.

In conclusion, Mrs. Nyaga challenged the audience by posing several questions. What next after embracing biotechnology? What do we do with the products and trained biotechnologists? What does the government offer youth who have the knowledge? She articulated that unless these issues are addressed, it may not be possible to get youth into sciences and retain them.

PrevPreviousE-Consultation: The Role Of Biotechnology For Food And Nutrition Security In Africa
NextEngaging secondary school students in scientific activitiesNext